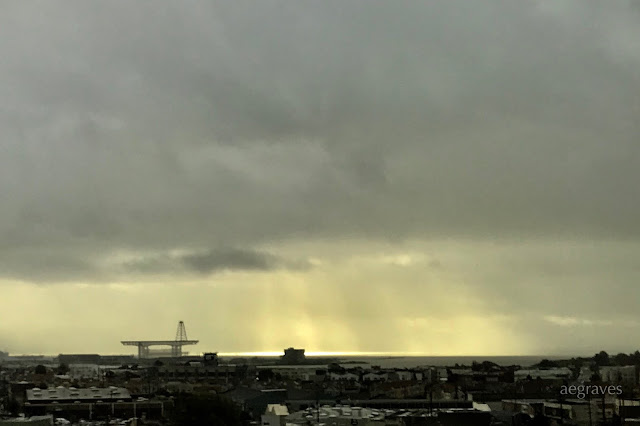 I always enjoying sitting on the bay-side of the bus during my morning commute southbound from SF.  That crane has become a life-landmark over recent years...  I have so many images of it.
Posted by Arlene (Beth) at 8:10 AM 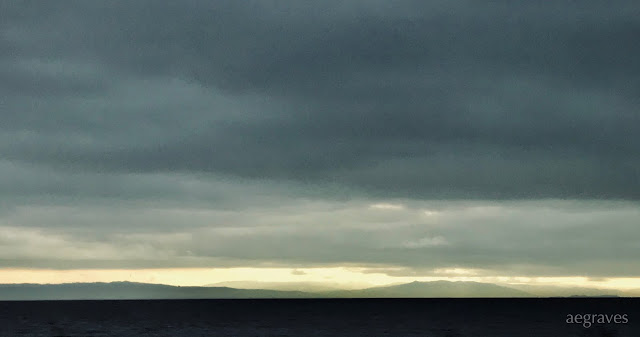 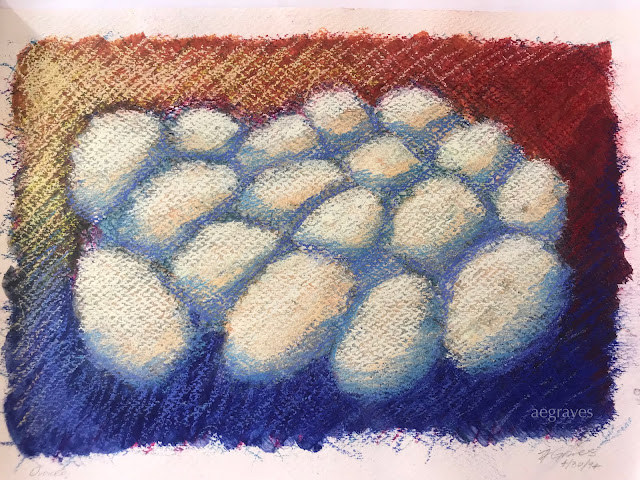 My painting archive is more fun than I recall!  I remember making this, back when I was testing gum arabic as a replacement for toxic spray fixative.

I remember drawing it, but I remember it as being smaller, and perhaps having fewer eggs.

It's a shame chalk pastel dust irritates me so badly!

Watercolor of a house I once lived in, and thoughts on making things 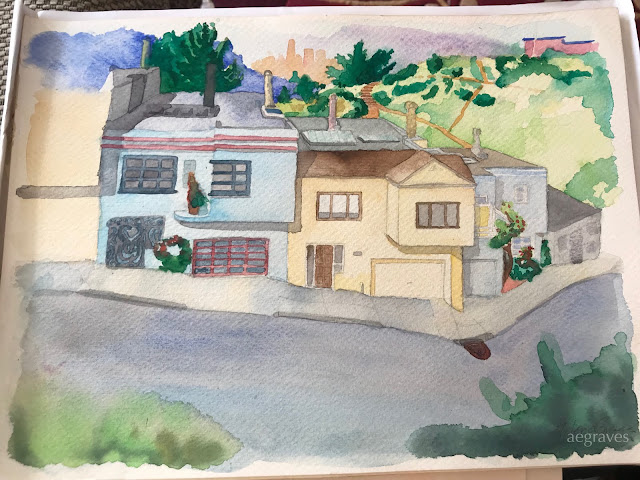 One of the complicated parts of being an artist is that I MAKE THINGS.  This may seem kind of obvious, but what isn't obvious is that I don't realize that other people AREN'T making things.  And when having a conversation about "things," I am using a different meaning than other people are at times.

This comes up in many contexts.  A colleague was upset that her husband tosses out all the Christmas cards he receives every year, while she does not.  I suspect that the cards he is throwing out weren't MADE by anyone he knows: they were merely purchased, and have rote greetings in them.  Would he throw out cards that were handmade, contained handwritten letters, or featured photos of people who are dear to him?  Probably not.  I make and/or design all of my cards myself, and receive cards with handwritten notes, typed letters, and photos of people dear to me, so my choices are different, but there's nothing wrong with either choice.  We aren't really talking about the same thing when we talk about "Christmas cards," so having a strong opinion about what people "should" do with the cards they receive doesn't make a lot of sense.

Likewise, I was texting with a friend last night, and she was shocked that I have anything from my life in the 1990s.  Which baffled me.  Why wouldn't I have things from that time in my life?  I'm a writer, a photographer, a painter, and was still studying architecture back then.  It seems unlikely that my life would leave no material trace!

For example, this post is illustrated with a watercolor of a house on San Francisco's Short Street (in the Castro; it intersects with Market), which I rented with friends for less than a year, perhaps around in 1993.  I don't think I have any photos of it, but I have this.  I remember that I was painting this when a long-time friend visited, to discuss his distress over his mother's stroke.  That was an intense day!

This little watercolor turned up in my garage-packing yesterday.  It isn't an amazing painting, but is totally representative of me at that time, and it shows that I go through rare phases where I paint representational things (as opposed to abstracts, which I paint more of). It fits neatly into my archive, to show my early development as an artist.

It does not need to be destroyed merely because there is a specific house-cleaning fad sweeping the country, or because it is old, and I might be able to paint it differently now.  (Of course I would paint it differently now: I am different.)  But that doesn't matter: I painted this when living there mattered to me, and I wanted to remember it.

If I hadn't painted it (and kept the painting), I wouldn't remember much about how the house looked, or where the skylights were, or what the houses on either side looked like.

I would remember the tree just above it to the right, on the other side of the valley well -- because I carved a rubber stamp of it. :)  Looking at things deeply to draw or otherwise represent them by hand burns them into memory in a special way. 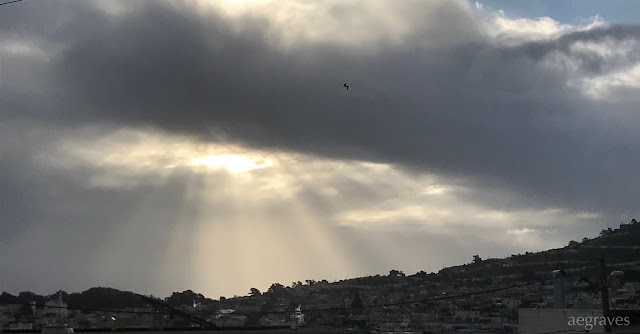 Documentary science was once performed entirely by hand: handwriting and hand-drawings and fast-drying watercolor paintings of the wonders of the natural and ancient worlds were used to record important and scenic things. Both professional draftsmen and artists documented the world around them through their mastery of pencils and paint. Now, watercolor paintings in particular are being digitized and studied for their context and content. This reminds me of how Japanese letters and diaries have been used to amass data on when cherry blossoms historically bloomed. It's another fabulous analog dataset! #watercolor #scientificillustration #illustration #science #bigdata

Our lost world in watercolours - the paintings that documented Earth

Janelle Shane, scientist and author of aiweirdness.com enjoys playing with neural nets, and I laugh myself to tears over some of the results! Here is her summary post of the best AI creative efforts of 2018. #artificialintelligence #ai #neuralnetworks #robotoverlords

10 things artificial intelligence did in 2018

I did one of these for 2017 last year, so I thought it would be fun to recap some of my favorite aiweirdness.com experiments from 2018. Sure, financial forecasting, facial recognition, and delivering ads may be the most common uses for machine learning, but that doesn't mean they're the best uses. 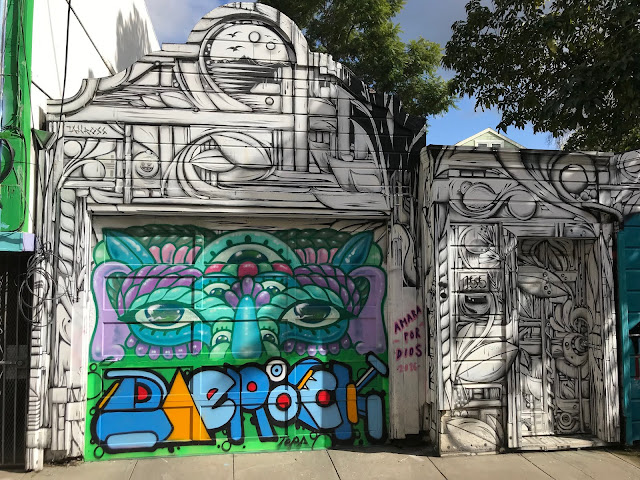 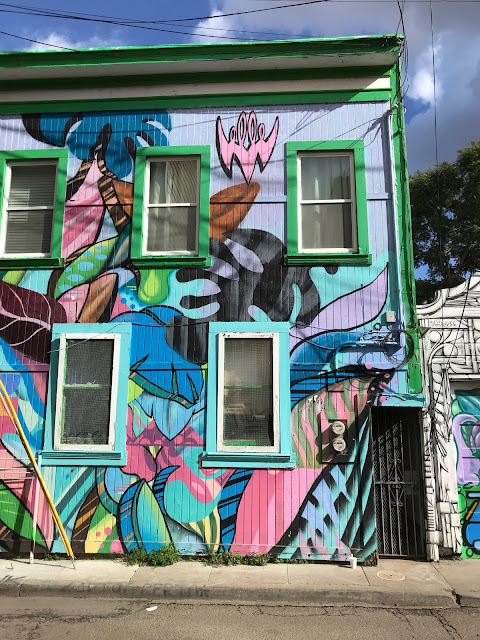 Bond Villains of the Trump Administration

When my friends remark on the absurdity we encounter over political graft in the news, I remark that there is a cartoon-level of villainy happening, so blatant as not to be believed. Of course, the Internet has done me one better, with this amazing thread mapping members of the current administration to historic villains from James Bond films... WITH MATCHING PHOTOS. It's an excellent compilation. This collection sparks joy throughout my peer group. #villainy #jamesbond

Thread by @KevinMKruse: "It's like this entire administration is made up of James Bond villains. All right, let's break this down.[...]"

Thread by @KevinMKruse: "It's like this entire administration is made up of James Bond villains. All right, let's break this down.[...]"

A dusting of snow on the western shoulder of Mt Tam

Thoughts on a Transatlantic Commute

In addition to the refreshed content on my main website, I also added a new piece. It's about repeatedly crossing the Atlantic Ocean for a taxing job while your friends assume you are skiing. #expatriate #employment #misunderstandings #businessclass

My "ten month" special project rotation finally ended, merely five years after it began. Looking through the diaries I filled, photos I took, and raft of business activities I completed, now that I FINALLY know it is behind me, I thought about the element of this that is LEAST understood by my friends.

As I am using Blogger, which doesn't support the sort of fancy link previews that Google+ offered, I need a tool to make things NICE. Thanks to the Google+ Exporter, I was introduced to Embed.ly, which generates the interface I expect. It's a great tool! #worldwideweb #blogger #linkpreview

Enter a URL and Embedly will generate HTML you can embed in your site or blog.

Now that I've finally gotten SSL for one of my sites, this tool is also fabulous. I especially appreciate how it points out mixed content (where you link or pull images from a non-secure site). This has saved me hours of hair-pulling. #worldwideweb #ssl #validator

Why No Padlock? - Why is my SSL web page insecure? Find the culprit!

On the same theme, I also rely on this CSS validator, as CSS is still not a natural thing for me. #worldwideweb #css #validator #w3c

I love the Validator! If you are a web author, it can help be sure your HTML is legit, and finds errors you may have missed. I recommend it heartily. #worldwideweb #w3c #html

We could all use to be refreshed now and then, right? I now have an SSL certificate, plus added code for mobile/tablet-friendliness. I've also revised some of the core content, and updated some of the newer features.

I'm happy to have backed Florian (Doc) Kaps' new project, which is "One Instant" peel-apart pack film for Polaroid-type Land Cameras. Yes, of course I still have a Land Camera. What kind of fanatic do you think I am? I like the cleverness of the project generally. For example, they tried to recreate the complex, accordion-fold package that pack film used to have, and it's a logistical nightmare. So, they decided to skip that, and make recyclable paper holders for single shots instead. Which is SO SENSIBLE. Here's their new website. With the Kickstarter funded, they'll hope to produce film and get it out mid-year-ish. #instantfilm #polaroid #landcamera #supersense

ONE INSTANT is based on a new, radical concept. It's not a classic packfilm but a next generation type 100 instant film that doesn't even dare to compete with the classic film legends of packfilm history.

The EAT Lancet Commission's Dietary recommendations for health and the planet

If human and planetary health matter, this scientific approach to solving well-documented problems with well-documented science is a great place to start changing our habits.

Can we feed a future population of 10 billion people a healthy diet within planetary boundaries? The Commission is delivering the first full scientific review of what constitutes a healthy diet from a sustainable food system, and which actions can support and speed up food system transformation.