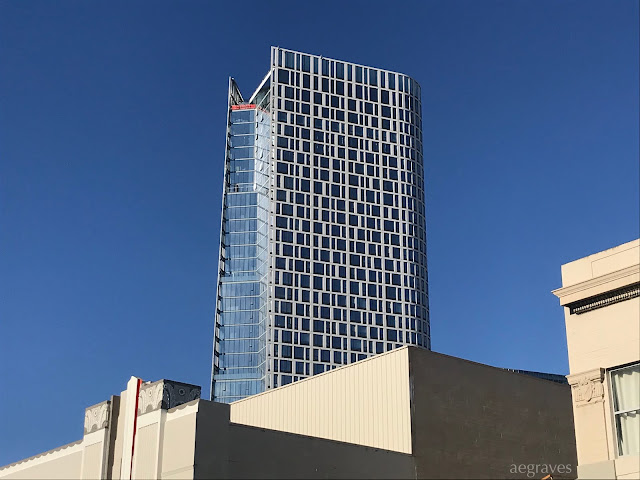 The construction site just across the street from it has broken ground as well...  It's strange to see such tall buildings where low rises have been for decades.
Posted by Arlene (Beth) at 4:33 PM 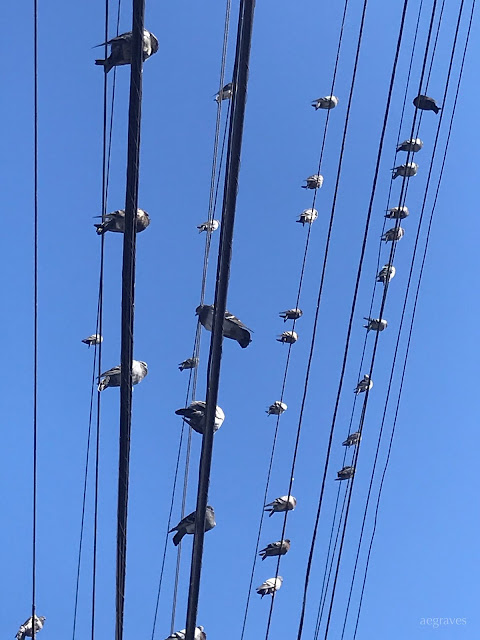 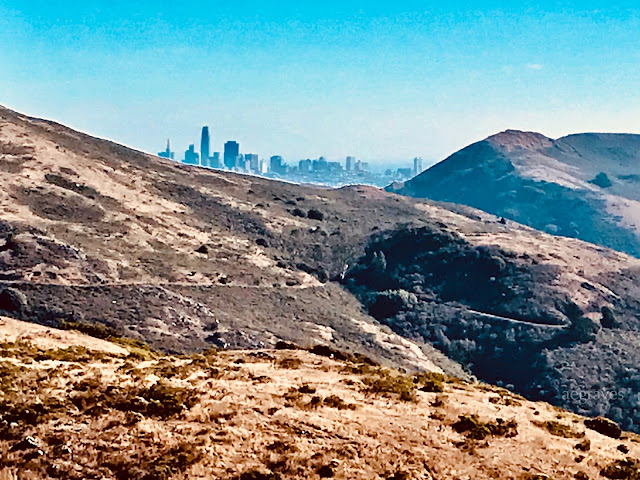 The phone filter is really working on enhancing that ridge line, isn't it?  This is a zoomed in view of the SF skyline from near where the Bobcat Trail meets the Marincello and Miwok Trails.
Posted by Arlene (Beth) at 7:46 PM

Looking South from within the Headlands

This is from the Bobcat Trail.  You can see the north tower of the Golden Gate Bridge peeking up on the left; Sutro Tower in the center of SF in the left third, and the shore all the way down to Pedro point in Pacifica in the right at about 80% across.
Posted by Arlene (Beth) at 7:41 PM

My friends were up for an easy hike, so I suggested we walk Tennessee Valley.  It's a gorgeous part of the Golden Gate National Recreation Area (nps.gov/goga), and relatively flat.  It's been years since I've been there, but it is a lovely place. So, off we went.

We parked near the GGNRA Tennessee Valley sign, started off at a trailhead, and and then walked up, up, and more up while I marveled at how I didn't recognize anything at all.  Was it because I had biked in?  Was it because it had been so many years?  And where did all these stairs come from?

We weren't on the Tennessee Valley trail: we were climbing up the Oakwood Meadow Trail (which isn't for bikes, which led me to believe I'd just skipped it), all the way to this view on the Alta Trail.

It was worth it, this view.  Only because my friends forgave me.
Posted by Arlene (Beth) at 7:39 PM 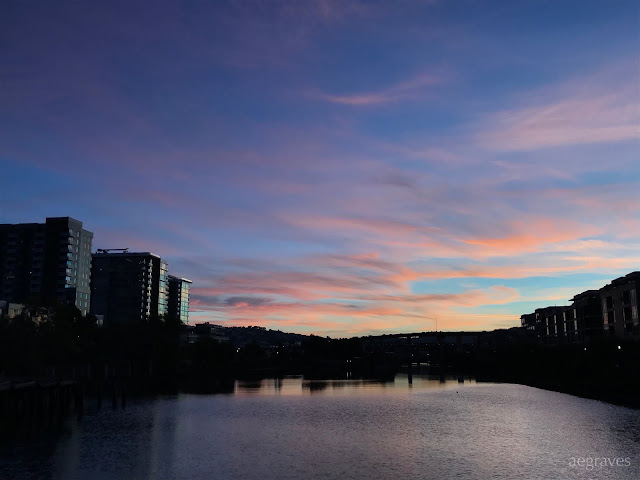 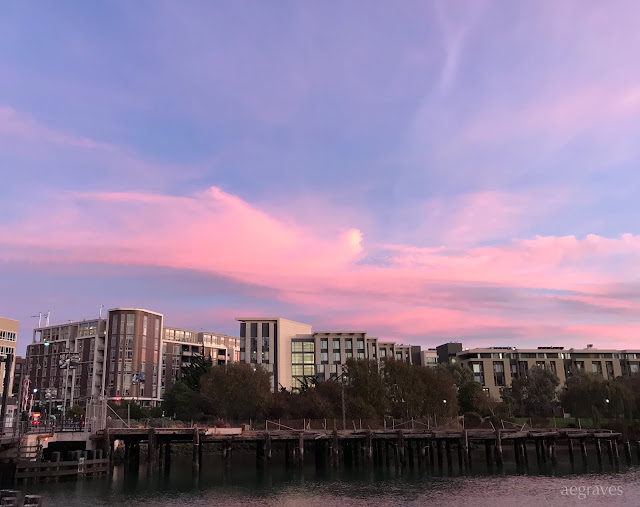 The air quality has been miserable since the fires, but there are consolations.  Colorful consolations.
Posted by Arlene (Beth) at 6:15 PM 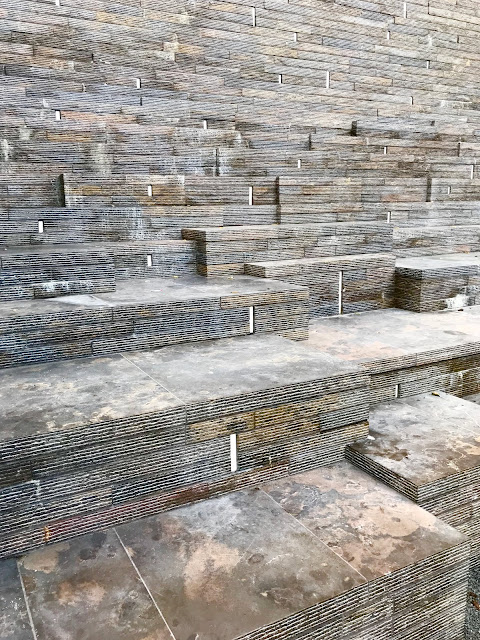 This gave me a flashback to something I designed, but this is BUILT and quite nice.  The stone colors are subtle.  I hope the verticals light up at night!
Posted by Arlene (Beth) at 6:14 PM 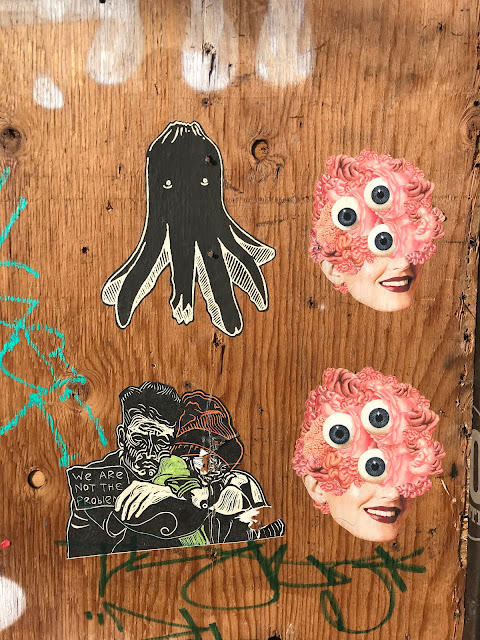 A bit of freestyle stickering.  I'm sure there's a term for this that I'm not fancy enough to know, specific to having-the-shapes-cut-out-like-appliqué.
Posted by Arlene (Beth) at 6:14 PM 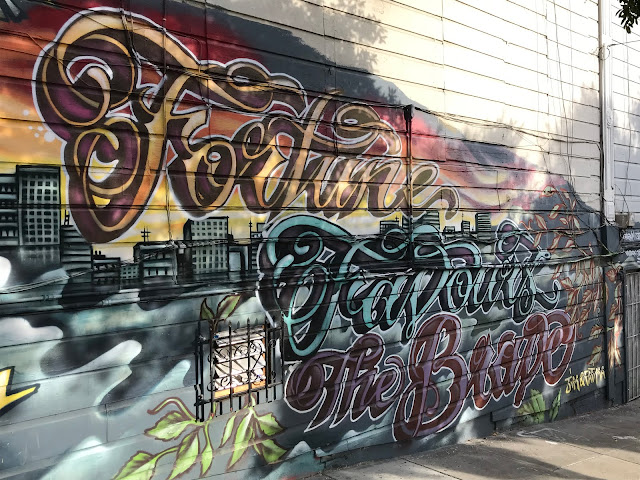 (I have a panorama of this wall as mural 5, but it exceeds my post size.) 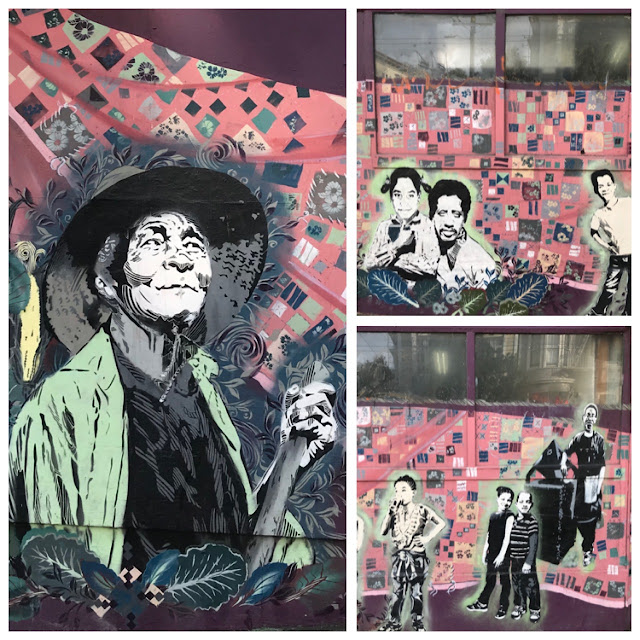 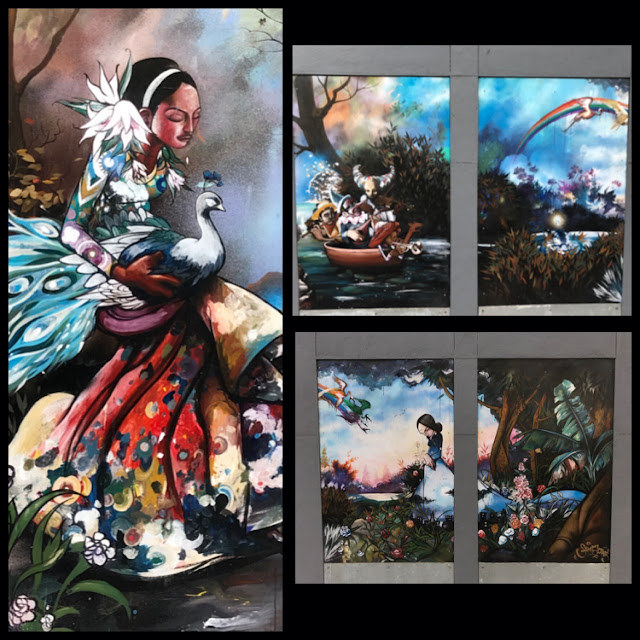 These three are taller than life size, and adorn a new-ish looking building that is likely an apartment block.
Posted by Arlene (Beth) at 6:12 PM 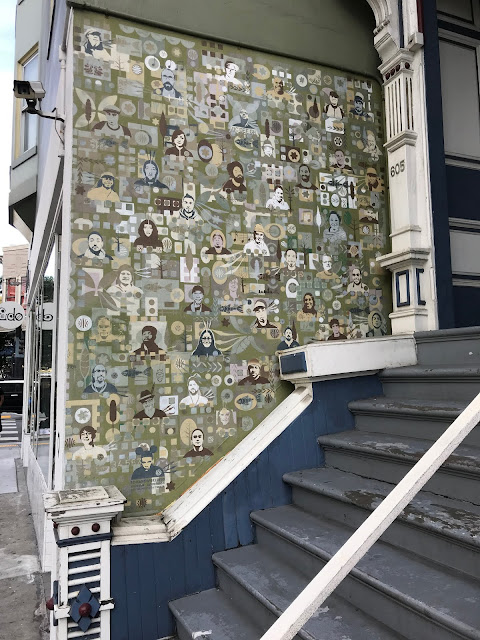 There is a lot of really impressive stencil work going on here, and in the prior mural!
Posted by Arlene (Beth) at 6:11 PM 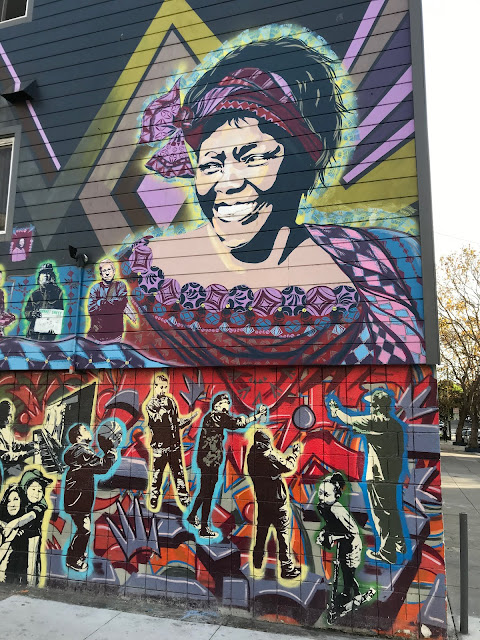 I don't often visit the Lower Haight neighborhood, and when I think of murals, I think of the Mission District's extensive collection.  But I wound up taking an informal mural tour of Haight (east of Divisadero), and was delighted by the work.
Posted by Arlene (Beth) at 6:11 PM 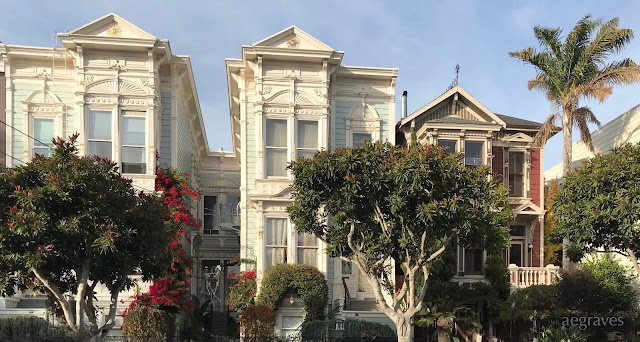 These are all just so CHARMING.  I'm a modern, glass-box person, but still.  *squealing sound*

The dancing skeletons are near the bougainvillea.

My phone decided that this was showing too much perspective, and so it adjusting it in a way that makes me perceive the windows as no longer truly rectilinear.  But I think I'm being too sensitive about the distortion-to-de-distort-perspective-lines.
Posted by Arlene (Beth) at 6:10 PM

Corner of many corners 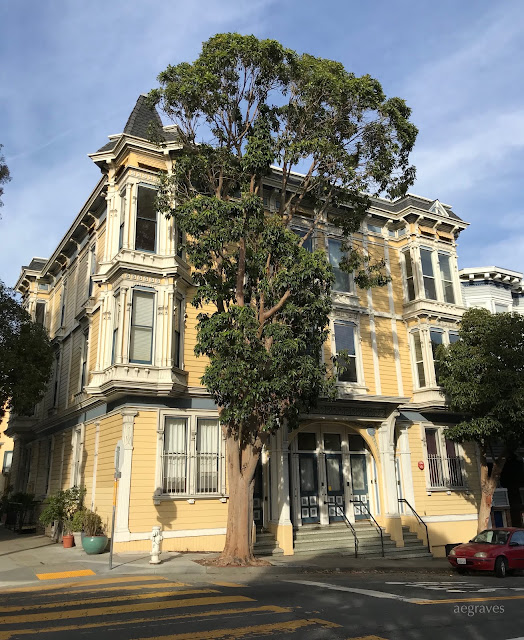 This is near Duboce Park, and I find the handling of the corners interesting.  And a lot of work!
Posted by Arlene (Beth) at 6:08 PM

The mysterious tiny bay windows on the left 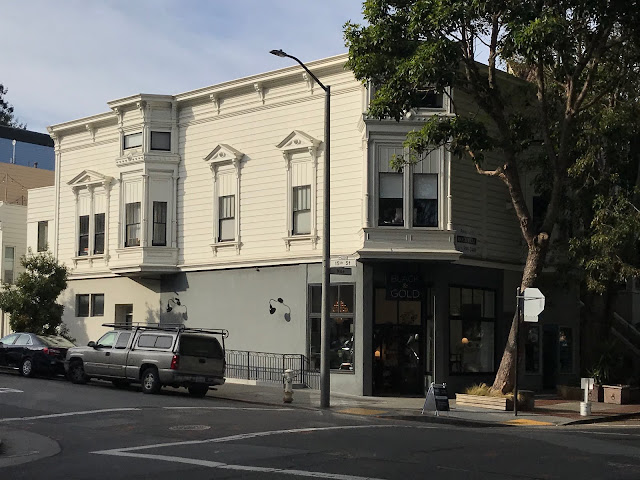 It's as if they couldn't decide what size the windows should be, made the openings too big and so  painted over the top third, and THEN decided to make a half floor upstairs?  Perhaps they enjoyed Being John Malkovich and did this in tribute?  It is odd.
Posted by Arlene (Beth) at 6:08 PM

I think it says something that I've been testing Lomochrome Purple at 200 ASA, and I chose the least purple image to illustrate the results I like.

On lush greenery, in harsh autumn sun, 200ASA is brutally purple.  So purple.  SO VERY PURPLE.

Somehow, I did not anticipate this.

"You bought a film with purple in the name, and you are surprised that it is purple?  IT SAYS IT IS PURPLE ON THE BOX!"

Looking In My Archive 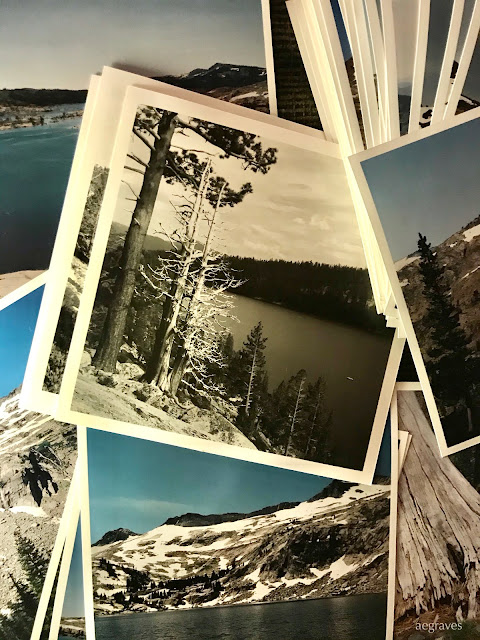 I sure have lots of undated prints.  My lab at this time printed LOTS of numbers on the back, but no dates.  Dates would have been nice.  (I can guess what year it was based on the address I used on the order envelope, in this particular case.)

I hope I have scans of these somewhere.  (Perhaps this stack of unlabeled CDs? Gah!)  These are images from Desolation Wilderness, up near Lake Tahoe, here in California.  It is a relentlessly gorgeous, high elevation, roadless wilderness with stunning lakes, snow still piled on the peaks in summer, and (at that time) a remarkable number of mosquitos.

Yes, I am the kind of gal who hauls an antique twin lens reflex camera and medium format film into the high Sierras.  But you knew that.
Posted by Arlene (Beth) at 7:30 PM 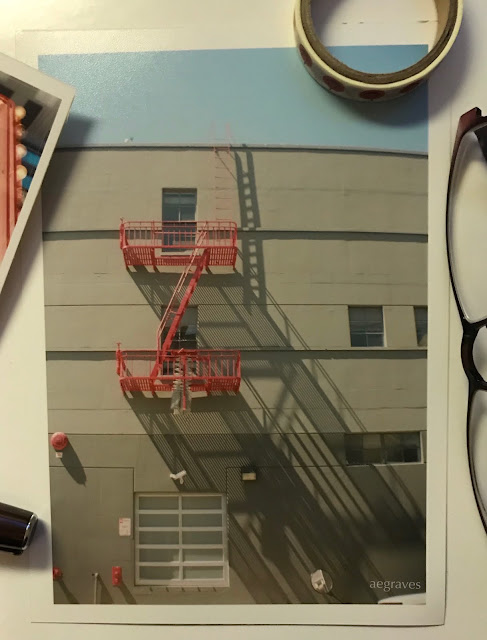 I have boxes and boxes of photos that no one but my photo lab tech has ever seen, and found this representative example from a test roll to see if my Target Brownie Six Twenty works.

Conclusion: it works!  It is a very old fashioned box camera, and has a little window that pretends to be the viewfinder, with little angled mirrors that more or less tell you where you are aiming.  More or less: the boundaries aren't especially accurate, and I'm a full frame composer, so it was vexing.  I wasn't sure what its focusing range was, so I have a stack of out-of-focus close ups of signs in this stack.

This print (from somewhere in the Mission, maybe on Bryant?) is a good example of  "things that are so detailed I don't want to draw them, but which I LIKE."  For some reason, which I never explain, fire escape shadows are one of those special things.  And you are lucky I don't post more photos like this.

Note that, if I drew this scene accurately, you would be convinced that I got the shadow of the ladder wrong, because the treads aren't visible from the side. But look!  The shadow makes sense!

The redness of the fire escape and alarm bell are satisfying.  I also like the inconsistency in my test rolls - I really AM testing cameras when I wander about.  I don't think I used this camera again, however, mostly because I have to respool film for it onto smaller "620" rolls (which take 120 film, but are just small enough to be a pain).
Posted by Arlene (Beth) at 7:30 PM 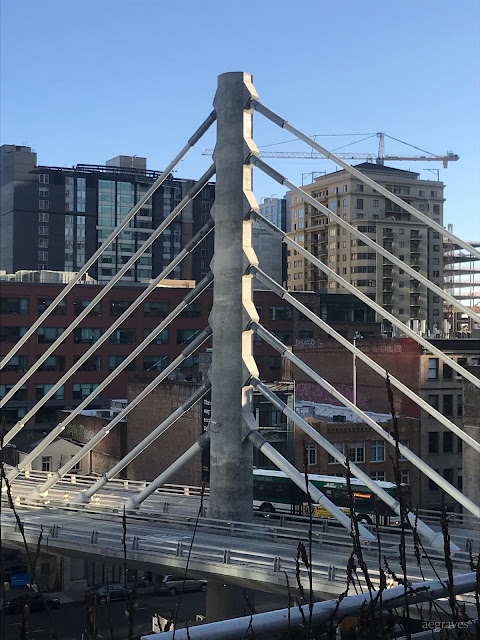 One of the liberating things about posting on one's own site is: you can post whatever you like.

By which I mean: I have very few friends who would find this bridge interesting, and if this were social media, this image would have no "likes," while someone's photo of their lunch at some fashionable spot would be racking up approval (if the lunch poster is a frequent liker in the endless cycle of liking that occurs on those sites).  But I'm out to please myself, so I don't have to worry about this particular bridge competing with baby photos, or cat photos, or lunch-in-restaurant-requiring-waiting-in-line photos.  It's so... easy this way!
Posted by Arlene (Beth) at 7:38 PM

Away from it all, or at least above it 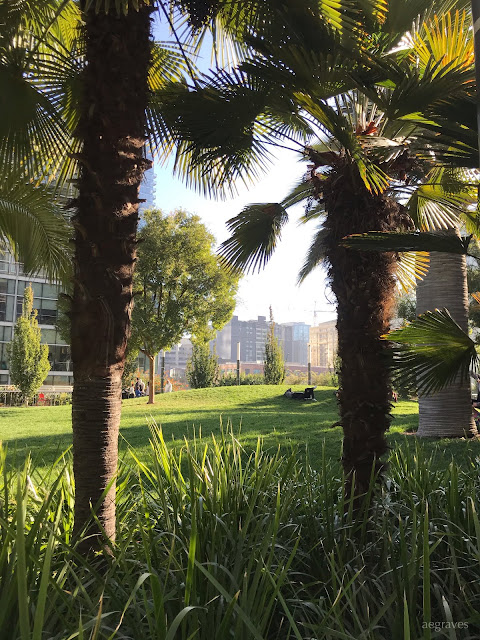 A lush green escape from the office, if only for a short while.
Posted by Arlene (Beth) at 7:37 PM 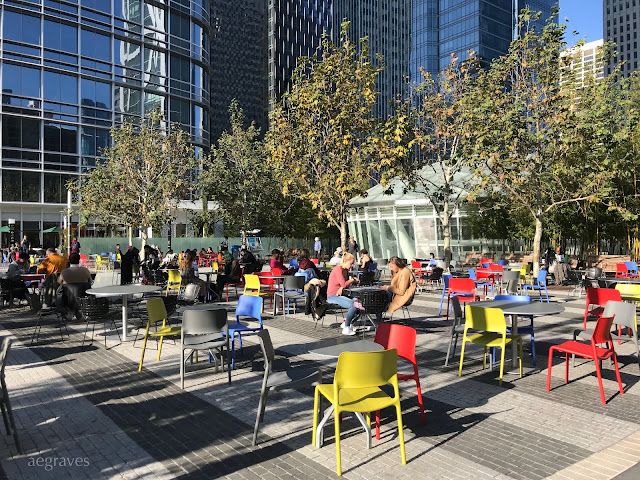 It was surprisingly cold today, especially in the shade.  It didn't help that the fog was reluctant to lift, and hung around the Bay Bridge until well into the afternoon.  But when it did clear, people went out to enjoy it!

The park atop Salesforce Transit Center was considerably warmer than the streets three-plus levels below.
Posted by Arlene (Beth) at 7:37 PM 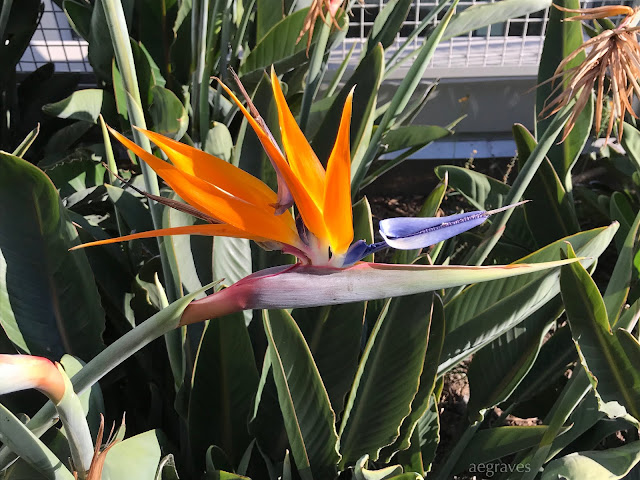 A captive tropical plant atop the Salesforce Transit Center, which is open for commuters yet again!  (And now I'll need to orient myself, because I'm used to the "temporary Transbay Terminal," which we have now had for years...)
Posted by Arlene (Beth) at 7:36 PM 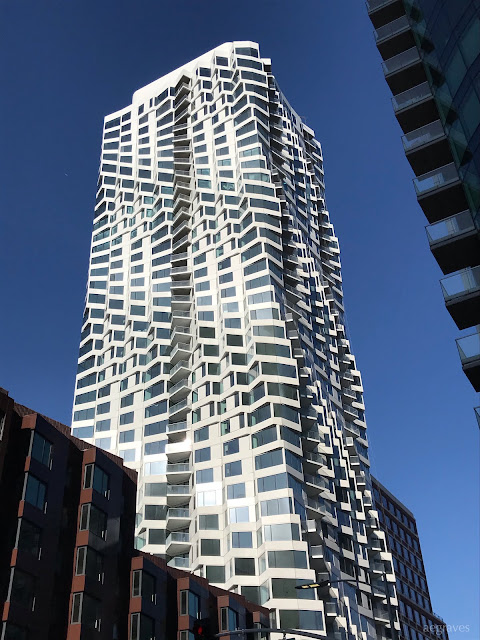 It is finally clad!  It's hard to photograph it without reflections, because there are so many angles.
Posted by Arlene (Beth) at 7:35 PM 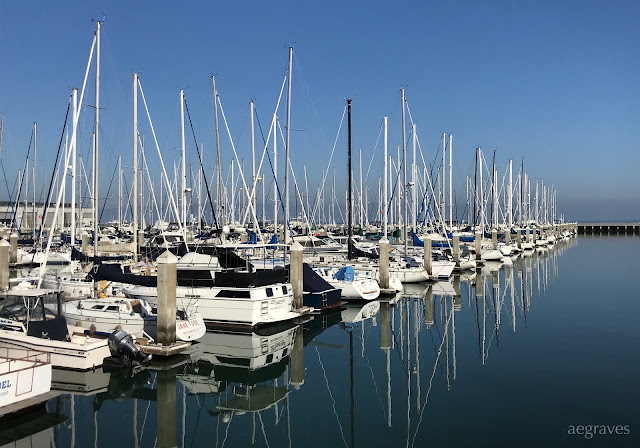 This would be a more charming scene without the thick, brown haze in the background...  Yes, the East Bay hills are in there, somewhere...
Posted by Arlene (Beth) at 7:35 PM 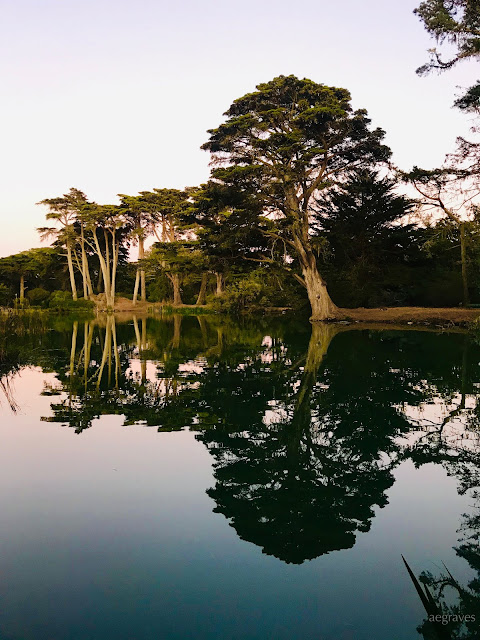 Me and my pal M enjoyed a long walk in the park, and were charmed by these reflections...  She and I both work long hours, and it was good to be away from our screens!
Posted by Arlene (Beth) at 7:14 AM 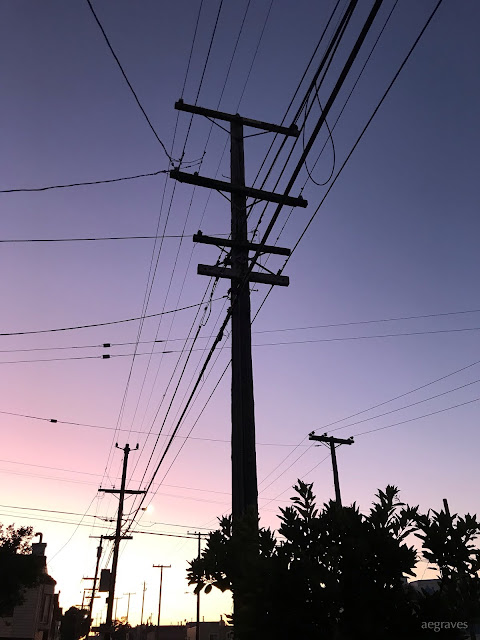 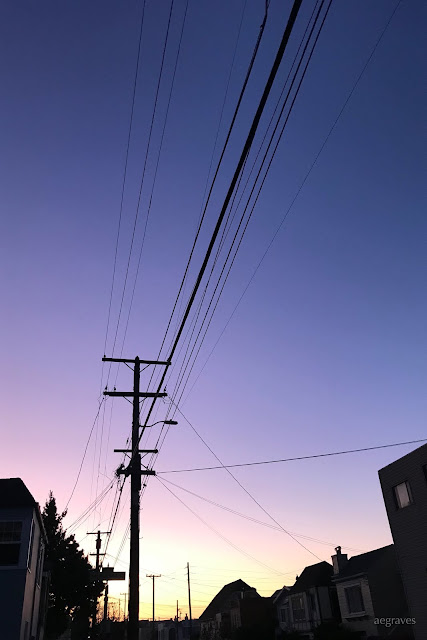 The only upside of pollution, especially from fires, has been extremely VIVID skies.
Posted by Arlene (Beth) at 7:12 AM 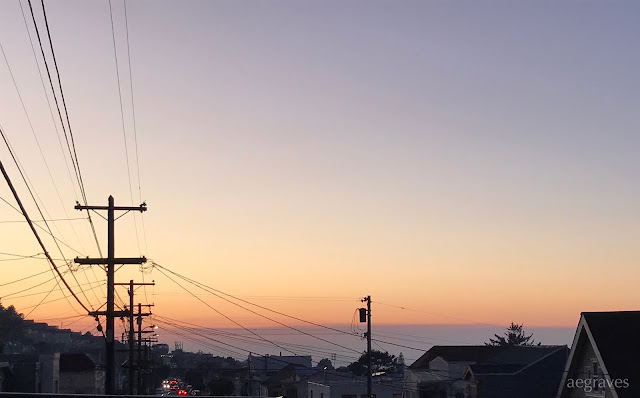 Don't breathe anything below that line...
Posted by Arlene (Beth) at 7:11 AM 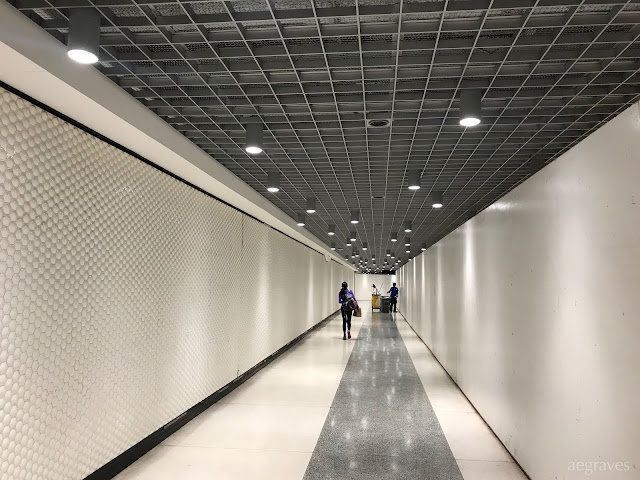 After an eternity of looking at exposed fireproofing over the Powell Street station's top level, a grid and new lights have appeared!

This was the first time in years that I've passed through this corridor without it looking like a medical ward, and I sincerely hope that the folks that would otherwise be there are benefitting from the new tax we passed, to provide more services to people who need them.
Posted by Arlene (Beth) at 7:08 AM 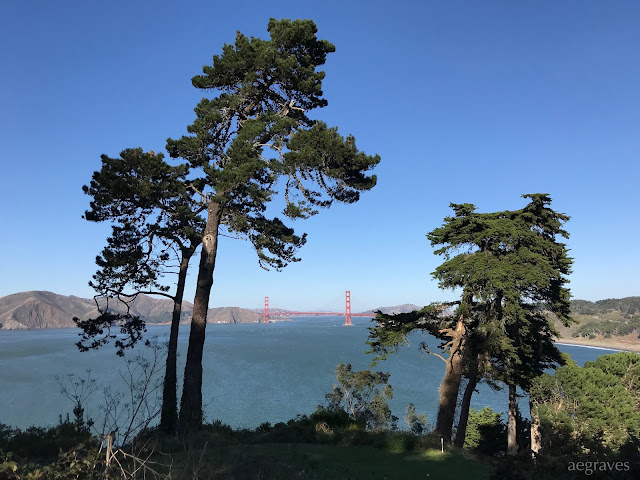 Things have been rough in California this month.  Major fires broke out around the state, and wind storms whipped them up into dangerous infernos.

This photo was taken during a break in a wind storm that briefly, so briefly, cleared the smoke-filled air while allowing me to step over fallen trees, branches, leaves, and other wind-blown debris.  It was good to be outside while not feeling in danger of being blown down.
Posted by Arlene (Beth) at 7:07 AM